Blogger's block. I have no idea how to start. I guess I'll just jump right in.

I won the assignment 3 of the hunger games yet again, this time with only 4 points. I need to step up my game! xP Anyways, the new assignment was the interviews. Another part of the book that hold a place in my heart, it being the scene where Peeta revealed his love for Katniss (PeetaxKatniss= <3) The background was inspired by the movie.

As you've probably noticed, everything I copy gets highlighted in white so I have to colour it black. I prefer not doing it as it takes about 10 seconds, so you'll have to live without an interview, unless you go to the hunger games thread.

I also did SMS set 11, which had to be in a night time setting. After a couple of days, this is the result:

I'm proud of it, but looking at Simanims... eh... not really xD She's sure to kick my ass.

I can't bother to type out the lyrics to the duck song, but...

Adios!
Posted by Alverna at 9:04 AM No comments:

Just gonna share my third picture for the Hunger Games Arena. The assignment was the Tribute Parade, and since the parade was when we first met Finnick in Catching Fire, it holds a special place in my heart, aka FANGIRL SPASM.

My sister and I were just planning to have her in her chariot, but then when we were making the background, my sister came up with the wonderful idea of using the triangle-globe-thingy as a TV globe, showcasing the tributes. The result?

I'm happy with it. A better look at her:

And before, for the fun of it!

That's it- so Adios!

I am so proud of myself for updating! :D *acts like a three year old who has just made a picture*

I want to start off by posting a piece of a chat with my friend because she's so hilarious.

Friend:  FTWTBPLESAP.(NPI).
Me: ...?
Friend:  Fuck the World today because people like Erik Saade are Popular. (No Pun Intended.)

If you don't know who he is, you're lucky. If you're curious, look up "Eric Saade Popular". Have fun in music hell.

Now onto the real reason I'm writing this. I did a pic for Shop Me Stunning, set 10. I'm quite proud of it!

Just to be funny, I want to say that it's a tiny pic. Get it? Like tinypic the websi- you know what? I'm not even gonna try to be funny.

Since it's such a tinypic *giggle*, I want to show the big pic of her to well... show off.

I also want to brag about once again winning the hunger games assignment! Not much of a difference between me and the second place pic, just 8 points... *hair flip, because I can't resist*

And Eurovision Song Contest started yesterday! *fangirl spasm* If you watch it, tell me your opinions! I am rocking to Euphoria, not just because it's my country, but because I love the song, and Loreen is sooooo talented!

Then the girl said, adios!

*Wipes Away Dust and Spider Webs*

I like to call myself many things, but a good blogger is not one of them. The last time I updated was in NOVEMBER, which, let's be honest, makes a pretty lame blog.

That's why I have decided to post all entries here, any funny RL things, general updates, etc.

I have joined "the Hunger Games Arena" comp at the officials hosted by FlawlessAria. Me being the Hunger Game nerd that I am... persuaded *coughforcedcough* my sister to it with me. We entered the lovely Alice Chase from district 7, home of the kick-ass Johanna Mason!

If you're wondering about the grey streak, we wanted something that people can remember her by. It's kind of like Cinna and Portia burning Katniss and Peeta, but not as extreme. And, let's not forget the awesome Susan sto Helit! 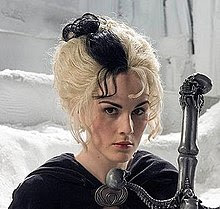 For the first assignment, life before the games, we showed Alice as the midwife that she is! My sis did such an amazing job on the hair... I almost started crying when I first saw it xD 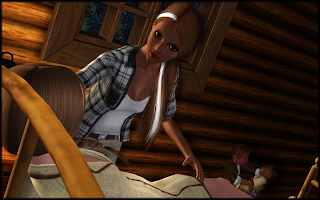 "Unlike most people from her district, Alice didn't work as a lumberjack. Instead she worked as a midwife to try and prevent women from sharing the same fate as her mother, who died giving birth to her little brother, Edmund. Her father was a full-time lumberjack, so most of the time she had to take care of Ed. It was a little hard to try and move a six year old around the district all the time, but she did what she had to do as a sister and a midwife. Thankfully Ed, who was wise for his age, never complained, or caused trouble. He usually sat further away, playing with his bear."

We won the assignment by 7 points ;)

For the second assignment, Reaping Day, we showed her volunteering for her friend, the blind daughter of  the mayor. I personally love our escort, who was once the beautiful Aqua from Elemental modeling. Oh, the power of hair and makeup.

I didn't have a lot to be afraid of. My name was only in the reaping bowl six times out of hundreds of others. Ed wasn't old enough to be reaped, so I didn't have to worry about him. I only had one friend, Mathilda Parkins. She was two years younger than me, and since she was the mayors daughter she didn't have to take the tessera, she only had four slips.
I didn't pay a lot of attention to our escort's speech. I had heard it so many times I had almost memorized it. I only payed attention to the proper reaping.
"The lucky female tribute this year is... Mathilda Parkins!"
I panicked. Mathilda didn't stand a chance in the arena. She was blind. Mathilda slowly made her way to the stage, weeping. There was no chance she'd get any sponsors- as if her chances weren't low enough already. There was only one stupid thing to do.
"I volunteer as tribute!" I yelled, running to the stage, holding Mathilda close to comfort her. This seemed to delight our escort, who smiled sweetly.
"Seems like we have a volunteer! What is your name, dear?"
"Alice Chase."
The crowd clapped unenthusiastically. They probably thought I was as good as dead, like most district seven tributes had ended up as. A midwife couldn't defend herself, right?"
But that's where they were wrong.
After cesareans I had experience with a knife. I was from district seven, so I knew how to handle an axe. I knew all pressure points in a body. I could stitch wounds. I was far from unprepared.

We also joined Ez's Grimm. The first assignment was to be inspired by the Little Mermaid by H.C. Andersen. This being a blog where you can be reported for nudity, we'll just link to it. Link-y link-y.

Also, what does everyone think about the new banner/background? We might change the background soon,  if it doesn't grow on us. Link to background, for credit's sake. 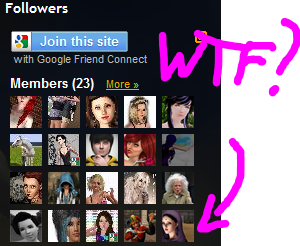 This just takes LAME to a new level! I DIDN'T KNOW. I HONESTLY DIDN'T.

Well, my email was going to be deleted and bla bla bla look up a thread where I wrote about it... yah yah...

NOW, my blog was going to be deleted and part of me said "sdg,htkmlhlkdfyui.", while the rest of me said "YAY!". Why? Because this blog was made in my days of noob-iness, and I never update.

Easy to fix, I know, but still, doesn't it feel better to start all over, sometimes?

Well... nothing really important to say...

(P.S.: IF you actually read my blog, could you post a comment or something saying AYE so I know there's an actual reason to write? Thanks!)
Posted by Alverna at 8:48 AM 4 comments:

I have grown tired of having a cbox filled with spams saying "pls visit my blog", I mean, how do some people get here?!

Like the person who has a blog about weight loss, diet plans and @$$3$!

And comments like "I love your blog", you f**ing don't know me or what I do, to you I'm just a confusing girl!

So, I am in the search of a new cbox, one where people can't randomly advertise on.

Something with a password would be amazing... but I can't find one.

My question to you: Do any of you have any idea where I can get my dream cbox?

Thanks!
Posted by Alverna at 2:22 AM No comments:

adopt your own virtual pet!

Buy her insurance today and she’ll love you forever. and health insurance quotes
can save people a lot of heart ackes and money by the nature of things. Nothing lasts as long as life insurance. best moving guide

Alverna
Two sisters, one account. You do the math xP